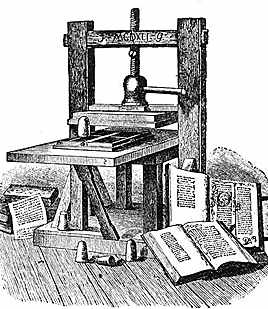 In his article Technology and Religious Change: Islam and the Impact of Print, Francis Robinson analyzes the relatively late use of the printing press by Muslims, who only utilized en masse about four hundred years after it had been well established in the Christian world.[1]

This is not because Muslims were unaware of the technology. Rather, Robinson states that the use of transmission, via person-to-person, has been understood by Muslims to be at the very essence of Islamic learning and held in greater esteem than the written word. Moreover, learning directly from a teacher gave the student the necessary tools and authority to transmit and interpret Islamic texts.

Printing Islamic scholarly works for general public consumption posed a threat to the authority of those who received their knowledge at the feet of scholars (i.e., transmitted person-to-person); as anyone who could afford the book may assume they can speak of it with the same authority as one who had studied it beneath a teacher.

However, this general hesitation to print Islamic scholarly works shifted during the period of Western colonization. At that time, the ᶜulama (particularly those in the subcontinent) feared that the Muslim community might slip into unbelief (kufr) due to the corroding Islamic religious infrastructure and the efforts of Christian missionaries. And, to address this challenge,they decided the risk of the community losing access to Islamic knowledge was greater than the risk of their authority being challenged.

The impact of the printing press has had both positive and negative effects. Islamic material was now being transmitted in large numbers to the masses, allowing the ᶜulama to publish works they considered critical in their time. Yet, by making material more widely available to the public the ᶜulama jeopardized their own role in the community. That is, if people could seek knowledge from a book, why did they need to turn to a scholar?

In Muhammad Qasim Zamam’s critical study, The Ulama in Contemporary Islam: Custodians of Change.[2] Zaman evaluates more closely the effect that not only the printing press has had on the South Asian Muslim community, but also what role the ᶜulama will come to play amidst this and other challenges in recent times. In his own introduction to the work Zaman relates that some Western scholars have criticized the very notion of understanding a tradition from reading their texts alone and that, for them, “The view that texts and authors can be approached, translated, and evaluated according to some universal principles of rationality is a liberal myth.”[3]

A comment that resonates well today when non-Muslims, and non-traditionally educated Muslims, attempt to interpret Islamic texts through the public media, sometimes asserting the very opposite of what the text traditionally entails.

While Muslim religious leaders may hold similar vocations, religious orientations, intellectual formations (as a traditional scholar), Zaman states, it is a “certain sense of continuity with the Islamic tradition that defines the ᶜulama as ᶜulama; and it is this sense of continuity that constitutes the most significant difference between them and their modernist and Islamist detractors.”[4]

Muslim’s view of their own tradition, the role of the scholar, and especially those of the past have shaped how they have responded to colonialism and other challenges in their recent history. However, in the absence of a traditional scholar—that is, one who has received their education through traditional means of person-to-person transmission—the text being cited is at greater risk for becoming rigidly adhered to as the interpreter may not possess the tools to properly adjust to his or her context. This being a phenomenon Judith Tucker pointed out in her study of Ottoman Syria and Palestine in the seventeenth and eighteenth centuries, stating: “the law, in practice, was much more flexible than the legal texts in which it [i: the law] was set out.”[5]