Taking a Stand to Change a Nation

There is something I am extremely passionate about… something I quit my job last year for and packed my car up and moved to Detroit in one day for… something I spend 80+ hours a week on to make a success… something that is my life until 2011: Bilal’s Stand 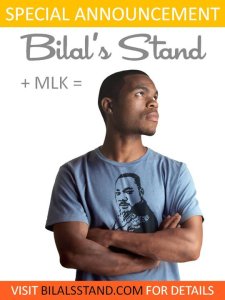 Bilal’s Stand, (in case you haven’t heard), is a seriously good Sundance-accepted award-winning film by a young, talented Muslim, Sultan Sharrief.  Sultan is a close friend of mine and after he got into Sundance and realized this movie could go somewhere, he asked me to come out and join him as his business manager. After reflecting and praying on it, I decided to go for it.  Why?  Because I realized the best way to counter the rising tide of Islamaphobia was to be found in media – in Muslims gaining control of how we define ourselves and how Islam is perceived by the masses through the television and movies they see.

And that’s exactly what we’re doing with Bilal’s Stand. It is an American coming-of-age story that chronicles the struggles of Bilal, a teenager from Detroit, as he tries to fight his way to college and discover his own identity as a Black Muslim.  It’s a movie that connects to all people – Christians, Jews, Muslims, old folks, young teenagers, activists, pragmatists, etc. – and we came up with a brilliant idea this fall for its distribution: we are releasing the movie to 1000 high schools this winter!

Now, imagine the impact of 1000 high schools screening Bilal’s Stand to their students as part of MLK Jr. Day activities, or Black History month?  That’s 1,000,000+ teenagers and teachers watching a movie – not about Islam or Muslims – but a hard-working, sincere honest Muslim who is American and going through all the struggles everyone in America faces.  What does that do?  It humanizes and Americanizes Muslims!

There are more reasons I’m passionate about this film, such as it’s ability to inspire youth to take a stand for themselves, hence why we created the Take A Stand campaign, which any educator should love – encouraging students to take responsibility for their own lives and future despite the odds!  But I will step down from my soap-box, and ask four things of you:

If anyone has connections to large national organizations, groups that would be interested in being partners to the movie and movement, or could help get this movie in a lot of schools, please contact me directly as well! :)

One thought on “Taking a Stand to Change a Nation”